Chun-Li leaps upwards and kicks while spinning repeatedly, hence the move's name. The move's hitbox is mainly the area of Chun-Li's kicks, which connect into each other easily. The amount of kicks, damage, and the height Chun-Li leaps depends on the strength of the kick button used to do the attack; weak kick has few hits and small distance, while the strongest kick button makes Chun-Li leap to the top of the screen. It is effective as an anti-air attack and can also be used for combos and juggles. In Street Fighter Alpha 3, X-ISM Chun-Li can use this move as a Reversal only. Chun-Li has an enhanced version of this move which is used as a Super Combo, called the Hazan Tenshou Kyaku.

In the first Capcom vs. SNK, the attack also gains special effects where Chun-Li fires short-ranged energy bursts in her kicking direction per kick. This changes to slashing trails instead in Marvel vs. Capcom 3'.

As a Unique AttackEdit

In the Street Fighter IV series, the attack is included as a Unique Attack. This unique attack can only be performed as a part of a Target Combo, which is performed as follows: Kintekishu (back and medium kick, which performs a low kick), Tenkukyaku (medium kick after Kintekishu, which performs a backward-facing splits kick to the opponent's jaw), and Tenshokyaku (down then up and medium kick, which performs the attack as it was in other games). Unfortunately, this version of the move cannot be used as an anti-air attack as the first two moves must be performed on a grounded opponent. Since it is no longer a special move, it does not cause chip damage if blocked. 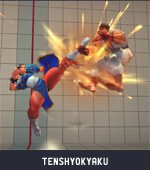 Retrieved from "https://streetfighter.fandom.com/wiki/Tenshokyaku?oldid=202533"
Community content is available under CC-BY-SA unless otherwise noted.