The Dolls (ベガ親衛隊, Bega Shin'eitai?, "Vega Elite Guards") or (ドールズ, Dōruzu?) are teenage girls of around 16 years old, who were captured by Shadaloo and brainwashed to be M. Bison's assassins and bodyguards, as revealed by the story of the UDON Street Fighter comics. Cammy was a female clone of Bison; however, she was the same age and acted the same way as the others, though it was later revealed that she could control the Psycho Drive.

Except for Cammy, the Dolls' names are based after the months of the year, in their home country's language.

The Dolls are completely loyal to Bison, and act and talk similarly to robots. They were high-ranking members in Shadaloo, only lower than Bison and the other Grand Masters: Balrog, Vega, Sagat, and F.A.N.G.

Originally, the Dolls could not live if Bison died, as the brainwashing had corrupted them to the point where they would have collapsed and died. Eventually, Cammy broke free from Bison's mind control (apparently with help from Dhalsim) and managed to do the same for the others. When Bison appeared, they collectively attacked him. Bison informed Cammy that she was his clone, and that if he died, she and the other Dolls would die as well. Cammy fought against his psychic probing and rescued the Dolls from Bison's control with the Psycho Drive. Cammy led the Dolls out of the Shadaloo base, and then fell unconscious along with the rest of the Dolls in a state of amnesia. Cammy was later found by Vega and taken to the Delta Red HQ.

For a time, it was unknown if the other Dolls survived, but in a trailer for the Super Street Fighter IV OVA, the Dolls were revealed to be alive. They were unconscious, strapped to stretchers and being placed in capsules. Juri beat the Dolls until they were all unconscious and then brought them to Seth for experiments. Seth stated that the Dolls will be killed after they arrived there. As Juri's plane took off with the Dolls, Cammy managed to jump on the plane and fought Juri briefly. Juri was winning easily and ended it by knocking the wind out of Cammy's stomach with her elbow, causing Cammy to back up. Juri then grabbed Juni's capsule and pushed it towards Cammy fiercely. Cammy tried to stop the capsule but it overpowered her and she fell off of the plane with Juni in the snow. Cammy then said that she will never forgive Juri.

Super Street Fighter IV shows that Juli and Juni survive; however, they do not seem to regain their memories. Juli's amnesia becomes so bad that she turns into (as Rose puts it) an "empty shell of a human", as she is unable to speak, smile, or even cry. Juli ends up staying with an elderly couple in the middle of nowhere. Juni is watched over in a hospital by Cammy and her pet cat.

In Cammy's prologue, when confronting Juri, she says "I hope you're ready to feel my hands around your neck; I haven't forgotten the sisters of mine you hurt". This is a reference to the rest of the Dolls; unlike Juli and Juni, their fates as of now are ultimately unknown.

Ultra Street Fighter IV reveals that Decapre is also alive, although whether she is being controlled by Shadaloo or S.I.N. remains to be seen.

In Street Fighter V, it was revealed that F.A.N.G was one of the chief engineers of the Dolls project, working behind the scenes to outfit them with upgrades to increase their combat prowess and their connection to Psycho Power. At the end of A Shadow Falls, the Dolls are reunited once again with the exception of Marz who appears to sacrificed her life to defeat F.A.N.G which ended up being meaningless as F.A.N.G managed to survive.

Cammy White is a perfect clone of Bison's body in a femme fatale way, where she was a soulless Doll in constant training, sent only to the deadliest and most difficult of missions. She made her first appearance in Super Street Fighter II: The New Challengers.

Juli is one of the four playable members of the Dolls; she first appeared in Street Fighter Alpha 3 as a sub-boss alongside Juni in a "dramatic battle" in the arcade version prior to the fight against M. Bison, and was made a default playable character in the home versions. Juli is assigned to track down Cammy, with her partner Juni assigned to track down Ryu.

Juli's history is slightly extended in the home versions, with the addition of T. Hawk to the cast. In T. Hawk's storyline, he searches for a missing girl from the Thunderfoot tribe named Julia. Julia is revealed to have become Juli, who was kidnapped by Shadaloo and brainwashed into an assassin. The designers of the home versions originally intended for Noembelu (a non-playable member of the Dolls) to be the girl that T. Hawk searches for, but Juli was used for this role instead.

The UDON Comics continuity works both Juli and Noembelu into T. Hawk's backstory, explaining that Julia was once the daughter of a German doctor who had been living and assisting the Thunderfoot tribe for some years, with Noembelu adopting her role from the Alpha series.

Her name is German for July.

Juni's attacks in particular are mostly based upon Cammy's appearance in the Vs. series, including an aerial version of Spiral Arrow and a version of push-blocking called "Psycho Shield". In the American instruction booklet for Alpha 3, Juni's Spiral Arrow and Cannon Spike were named (seemingly erroneously) as Psycho Crusher and Psycho Shot, respectively. Her name is German for June.

Originally from Russia, Decapre's appearance resembles Cammy with a black mask. Her face is burned on the left side. Like Vega, Decapre uses claws in hand-to-hand combat, except shorter and in both hands. Her name is derived from the Russian word for December, Dekabr' (декабрь). Ultra Street Fighter IV is her fighting game debut and instead of using a claw, she uses Psycho Power infused daggers as a weapon.

The rest of the members include:

There are also a multitude of trainee dolls, known as the Apprentice Dolls (ドールズ見習い, Dōruzu Minarai?) that have yet to reach the ranks of the above Bison's dolls. The elite amongst them can eventually become proper Dolls. The codenames given to them are the name of flowers in the language of their country, such as Löwenzahn (レーヴェンツァーン, Löwenzahn? "dandelion" in German). The intermediate and senior Dolls are more combat oriented, the high rank Dolls being stronger then the high rank Shadaloo Soldiers.[2] Low rank Dolls appeared as enemies in Chun-Li ni makase China.

Low-Rank Dolls with Cammy, Vega, and M. Bison
Add a photo to this gallery

M. Bison, Cammy and The Dolls in Street Fighter Alpha 3

The Dolls in Street Fighter V

The Dolls after their release from Shadaloo in Street Fighter V: Arcade Edition 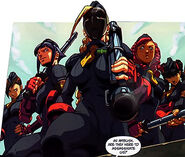 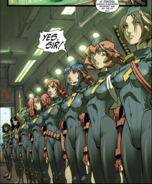 The Dolls in UDON comics
Add a photo to this gallery

Retrieved from "https://streetfighter.fandom.com/wiki/The_Dolls?oldid=199117"
Community content is available under CC-BY-SA unless otherwise noted.