Not to be confused with Oni, or the character from the animated series.

The Great Oni, known as Mysterious Budo (ミステリアス・ブドー, Misuteriasu Budō?) in Japan, is a character from the Slam Masters series of wrestling games.

The Great Oni, also known as "The Demon of Sobriety," is a Japanese wrestler whose theatrical appearance (said to be that of a Kabuki leader) excites the audience. He has been called the "Pale-Faced Devil" because of the white face paint he began wearing at the request of a local promoter during the period he spent training overseas. His appearance influences his words sounding like the drama tunes of that period. Oni is frequently at odds with fellow CWA member El Stingray, whose flashy wrestling style is similar to his own. Oni's swift movements enable him to toy with his opponents. He is also a good friend to fellow CWA wrestler King Rasta Mon, in which the two of them work together as a tag team known as the "Exotic Warriors".

Oni's character is loosely based on and inspired by two real-life and famous legendary Japanese wrestlers, with the two aforementioned wrestlers themselves being The Great Muta and The Great Kabuki.

Though Oni himself does not appear in the Street Fighter animated series, in the episode "New Kind of Evil", the human forms of the three guys who become monsters resemble that of Gunloc, The Great Oni, and Titanic Tim. 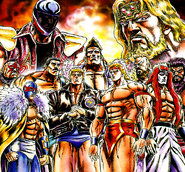 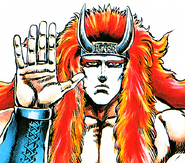 A screenshot of The Great Oni defeating Victor Ortega in Ring of Destruction: Slam Masters II.
Add a photo to this gallery

Retrieved from "https://streetfighter.fandom.com/wiki/The_Great_Oni?oldid=208844"
Community content is available under CC-BY-SA unless otherwise noted.