Leader of the BWA

The Scorpion, known as Astro (アストロ, Asutoro?) in Japan, is a fighting game character from the Slam Masters series of wrestling games.

The Scorpion was designed by the famous manga artist Tetsuo Hara. His moveset is based on the famous and legendary Japanese wrestler Tiger Mask while his American name and his mask is a subtle reference to the infamous "Black Scorpion" gimmick in WCW.

The Scorpion's mask and uniform also bears resemblance to the mask and suit of the famous and legendary Mexican luchador, Tinieblas (the Spanish word for "Darkness") as well as that of his son, Tinieblas Jr.. The wrestler Tinieblas was one of the first Mexican luchadors to ever tour Japan in 1974.

The Scorpion is a powerful and skilled masked wrestler whose true identity and personal history are shrouded in darkness. He is the leader of the dark professional wrestling organization known as the Blood Wrestling Association (BWA) and the main antagonist of the Slam Masters series. 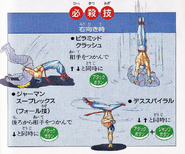 The Scorpion's wrestling moves from the Super Famicom manual.

Official artwork showcasing a tag team match consisting of the "Hyper Cannons" (Biff Slamkovich and Gunloc) vs. the "Silent Assassins" (The Scorpion and Jumbo Flapjack).