The Tiger Destruction (タイガーディストラクション, Taigaa Disutorakushon?) is Sagat's first Ultra Combo in the Street Fighter IV series. It is a more powerful version of his Super Combo, Tiger Genocide.

Executed by performing two quarter-circle forward motions and pressing three kick buttons, Sagat chains a Tiger Knee and two consecutive Tiger Uppercuts, the first one being quite short while the second one jumps much higher and hits with the opposite fist covered in energy (possibly the same type of energy used in the Tiger Shot).

It is able to hit an opponent in mid-air (making it ideal for juggling), has a good approaching range, and is able to counter the opponent should they use a projectile; the beginning frames of the move's Tiger Knee can pass through them. As with most Ultra Combos, it can also be used to punish or after a crumpling Focus Attack. However, should it miss or be blocked, Sagat suffers a very long recovery that leaves him vulnerable.

Another notable aspect about the move is that Tiger Genocide can combo into Tiger Destruction if the former ends up pushing Sagat's opponent against the corner; in fact, one of Sagat's trials involves doing this. However, positioning is key, as the target must be just behind the center of this stage when Tiger Genocide lands in order for this to be a guaranteed confirm; otherwise the target can end up being too far away for the followup Destruction.

And finally, if any part of the attack hits (unblocked), it is guaranteed for the full animation to commence (barring any glitches).

Another shot of the last Tiger Uppercut, hitting C. Viper 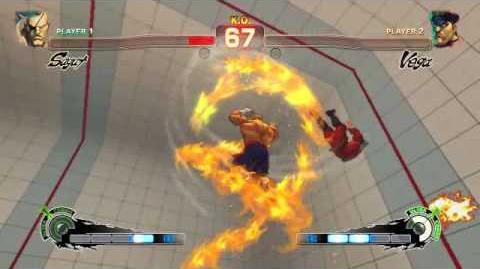