The Tragedy Assault (トラジディアサルト, Torajidi Asaruto?) is one of Charlie Nash's moves in Street Fighter V.

Executed by performing a "Shoryuken" motion (forward, downward then down-forward) and pressing punch, Nash performs a horizontal leap and, if unblocked, Nash grabs the opponent by the head, slams them to the ground, shocking the enemy with a bolt of electricity, before tossing them away.

Despite its appearance, Tragedy Assault is not a grab and can be blocked. The move can be used to end combos with damage rivaling his Sonic Scythe at higher strengths, while also providing more space, or more time for a set-up if it leaves the opponent cornered.

The strength of the punch button determines the startup time, the jumping distance, the damage dealt to the opponent, and how much meter Nash steals. The Light version comes out faster, but has the shortest distance and deals the lowest amount of damage. Conversly, the Heavy version deals the most damage and travels the farthest distance. However, it has the slowest startup. The EX version comes out the fastest and almost a fullscreen jump. While it does slightly less damage compared to the Heavy version, Nash tosses his opponent upwards, allowing him to follow up with his V-Trigger.

The EX Tragedy Assault also restores an amount of Nash's health equal to the damage done to the opponent, taking into account the presence of combo scaling. The normal Tragedy Assault will take Critical gauge away from the opponent and give it to Nash.

Nash tosses Ryu away at the end of the attack 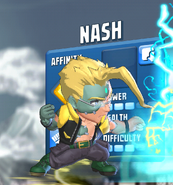 Gif animation of Nash using Tragedy Assault against Cammy in Street Fighter V.
Add a photo to this gallery
Retrieved from "https://streetfighter.fandom.com/wiki/Tragedy_Assault?oldid=203667"
Community content is available under CC-BY-SA unless otherwise noted.