Red (A black veil covers them)

While it can theoretically take on virtually any form, Twelve's default appearance is a milky-white semisolid male humanoid. Its body is generally smooth and featureless. Its head is equally smooth and sloped like a helmet with a pair of thin, red eyes, covered by black veils, set above an expressionless, narrow mouth. Though it can alter its shape, the transformation is not perfect: it will maintain its coloring even on details such as clothing.

Twelve bears no active personality, usually copying its opponents' quips and uttering "target" and "complete". Beyond this, Twelve is only capable of expressing itself in a binary code cypher (00001 = A, 00010 = B, etc.). Its winquotes imply a simplistic, aggressive and even thuggish personality, akin to that of an arrogant foot soldier.

In its rival battle against Necro however, Twelve is shown speaking in a normal manner. Twelve isn't without quirks in its personality, however. In one of its winposes it looks around to make sure it isn't being seen, jumps into the air, transforms its hands into wings and flies away while shouting 'woohoo!'.

Twelve appears to be inspired by many characters and figures within sci-fi stories and series. Its overall appearance is most similar to that of the episodic antagonist Spell Seijin of the tokusatsu classic Ultraman (or more specifically, Ultraseven); the episode which it premiered in was elevated to the subject of much interest due to its banning regarding the controversial subject of nuclear war, and the genocide of the human race due to the political climate and potential to do so. Said episode was also the twelfth in the series, likely being the origin of Twelve's name. Twelve's abilities to turn its limbs into blades or other weapons and to morph itselfinto its opponent may also be inspired by the T-1000, the main antagonist from the 1991 science-fiction movie Terminator 2: Judgment Day.

Another possible influence appears to be derived from that of the antagonistic alien race of the Angels and the protagonist EVA Units of the mid-90's breakout mecha anime series Neon Genesis Evangelion. While Angels within Evangelion are massively different regarding their physiology within their species, the EVA Units are revealed to be derived from the Angels themselves, in particular that of the First Angel. Twelve's abilities to morph and transform to suit any situation takes on the Angel's abilities to adapt and grow into whatever form by will alone is an aspect derived from them made more tangible, and takes on a consistent humanoid form normally, much like the EVA Units. In particular, one of Twelve's win positions displays Twelve hunched over with its arms down and hands in a claw like position, then Twelve arches it's back while on all fours and roars its head up and shakes as if it is roaring. This action is very similar to that of the main protagonist Shinji Ikari's EVA Unit after going berserk on its own accord, an action that consistently reappears within the series.

Regarding real-life angels, Twelve and its brethren appear to take on the spiritual aspects of angels and holy entities; though manifestations and appearances are popular in the public mind, it is considered within the philosophy of the spiritual that heavenly messengers of a higher power are capable of manifesting any form they chose, transcending the limits and boundaries of the physical world to their intended recipient. Within Gill's 3rd Strike ending, several Twelve clones appear soaring through the skies above the chosen people of the world as Gill leads them to the promised land, appearing much like the traditional angels of Abrahamic tradition.

Twelve is the ultimate result of Gill's "G-Project," a successor of Eleven and biological warfare operation headed by Dr. Woo and overseen by Gill's brother, Urien, whom Twelve considers to be its father. A mimetic genetic creation, Twelve is able to assume the forms of other people and change the shape of any part of its body to fit the task at hand. It is also extremely resistant to damage (which is not reflected in gameplay; it has the fourth lowest health of the entire Street Fighter III cast, after Akuma, Yun/Yang and Ibuki) and slavishly obedient, making Twelve the perfect soldier.

Once Twelve was declared a success, mass production began, with over 500 copies known to exist,[2] and the original was sent on a special mission: locate and retrieve Necro, the original G-Project prototype, and Effie, Necro's companion and the one who freed him from the laboratory. When Necro encounters Twelve, the latter is accompanied by several more of it's "brothers" before it decides to fight Necro himself.

In its ending, Twelve is held in a containment unit back at the laboratory, along with a multitude of clones; some of the clones are lined up in formation beside the units. A pair of scientists carry on a conversation in front of the "main" Twelve's chamber; one of them looks into the chamber with a fond expression, which quickly turns to a devilish sneer. As he leaves, Twelve's hollow eyes suddenly gain red irises, hinting that it may have gained sentience.

Twelve's unusual fighting style, officially referred as "Hyper adaptation", revolves heavily around the use of its manipulable and transformable body. Along with transforming and extending its limbs into multiple shapes, including axes, spikes, drills, and other weapons, it is able to utilize the supreme flexibility of its body to adapt to any situation. This further includes being able to mimic functional biological anatomies of other species and even humans.

Twelve can create patagia (wings made of membranes) on its limbs to glide, being the only character in Street Fighter III with an air dash, which can alter the arcs of its jumps. It can also "crawl" on the floor, allowing it to remain mobile while evading many ranged attacks. Twelve can also render itself transparent for a short time using its taunt, becoming invisible to the opponent's eyes. Its X.C.O.P.Y. Super Art transforms it into a copy of the opponent, allowing it to use any of that characters' standard moves. It will even sound the same as the opponent it transforms into, although with a high-pitched gurgling voice.

A Twelve clone appears in UDON's Super Street Fighter comics in both Volume One and Two. After M. Bison's death at Akuma's hands in the previous title via the Raging Demon, Twelve takes the form of M. Bison while in service of the Secret Society. Twelve has perfected its X.C.O.P.Y. move to a point, that its clothing appears to be the same colour scheme as M. Bison's. It does not speak in a gurgling voice either.

In Volume One, titled New Generation, Twelve's identity wasn't revealed. This drew some negative reception to Bison being depicted as servile to the Secret Society. Twelve aids in the capture of Ryu by attacking Sakura which distracts Ryu long enough for Urien to gain the upperhand in their previously stalemated fight. In the second volume, Hyper Fighting, Twelve's true identity is exposed when it takes a massive beatdown by Dark Sakura and followed shortly by Juri, causing it to malfunction. Twelve flees the scene, soon after.

While Street Fighter III: 3rd Strike is the only game so far in which Twelve is a playable character, it has also appeared in SNK vs. Capcom: Card Fighters Clash as a card, and in Urien's ending in Capcom Fighting Evolution. 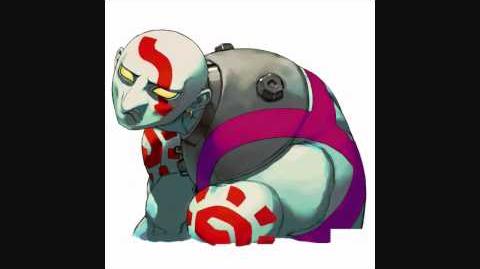