Ultra Street Fighter II: The Final Challengers is a 2D fighting game developed and published by Capcom for the Nintendo Switch. Released worldwide on 26 May 2017, it is an updated version of 1994's Super Street Fighter II Turbo. The game features two graphical styles—classic pixel art and updated high-definition art. New gameplay mechanics and modes were also introduced, with minor changes being made to the game's balance in addition to adding Evil Ryu and Shin Akuma from the Street Fighter Alpha series, and Violent Ken from SNK vs. Capcom: SVC Chaos to the roster.

There are two graphic options, which are "Classic" and "New Style" graphics. The latter option (also known as "New Generation Mode") reuses UDON's redrawn sprites and stage backgrounds from HD Remix. Their ending artwork is also implemented regardless of which graphic option is chosen. Conversely, the characters' portrait arts under either option are remastered from the originals.

The game has the option to have special moves and supers on the ready by assigning them to four buttons that can be pressed once to activate that special move.

There is also a Dramatic Battle Mode, called "Buddy Battle", that was featured in home versions of Street Fighter Alpha games, which allows two players to face CPU opponents together.[2]

As with the graphics, there are both Classic and New Style sound options to choose between. Classic sound settings' sounds remain the same as the previous Street Fighter II update series.

If the sound setting is in New Style, however, the characters will use the Japanese voice actors and sound effects from the current Street Fighter games since Street Fighter IV and onwards, rather than also having English voice actors while in that graphic mode. The game also features a new announcer voice heard in all modes of gameplay (including the Classic sound option), so as to accomodate the update's new features (added character names, the change of USSR to Russia [as per the official timeline], the title call at the end of the new opening sequence, and so forth). Additionally, a new soundtrack has been produced for the game, with the music being closer to Super Street Fighter II Turbo and not being remixes with unique styles. Despite this, the music heard in the endings of the pre-existing 17 characters is retained from HD Remix (this occurs even under Classic settings) as well as the staff roll theme that follows.

Two new characters have been added: Evil Ryu and Violent Ken. This marks Violent Ken's first appearance in a mainline Street Fighter game. Evil Ryu retains most of his moves from the Street Fighter Alpha games and his voice is an altered version of original Ryu's, sounding more demonic. Violent Ken has new tools carried over from SVC Chaos, such as his command teleport dash, Rasetsu Kyaku[3] and his voice is altered in the same manner as Evil Ryu's. Akuma is also now a regularly selectable character, while Shin Akuma is a secret character, sharing his slot with the newly added Random Select icon.

The game features three new modes and one returning mode. The Way of the Hado mode is a first-person shooting gallery where players take control of Ryu and fight waves of Shadaloo soldiers using the Joy-Con motion controllers. To perform moves, they have to be mimicked with the controllers. Ryu can be improved in this mode using the Practice Mode, which lets players practice a fighter's moves and gain experience points to improve the following parameters: vital (health), attack, speed, guts, defense and luck.

The Arcade Mode has three stages: Beginner, Standard and Extra.

Color Edit mode allows players to make custom color schemes of a given fighter; up to ten colors can be saved for each custom character, which can be used in all game modes, including online.[5]

On the decision to revisit Street Fighter II, series producer Yoshinori Ono noted that they wanted to go back to their roots.[6] Capcom chose to include two graphical styles so that the game would give old players a sense of nostalgia but still appeal to a younger audience with the update art.[6] The game's high-definition graphics were created by Udon Entertainment. The development team did not want to overhaul the game's balance as they want the game to feel like a fighting game from the 1990s.[6] However, they felt that some questionable aspects of the game's balance should be re-tuned.[6]

Ultra Street Fighter II: The Final Challengers received a mixed reception, according to review aggregator Metacritic.[10] The game was criticized for charging a US$40 retail release for what is essentially an updated port of the much cheaper Super Street Fighter II Turbo HD Remix.[11][12]

The Way of the Hado mode was also panned by critics for poorly implemented motion controls that are prone to confusing attack inputs for other attacks, as well as being shallow in content.[13][14][15][16][17] The game's functionality of the Joy-Con controllers was also criticized[18] with critics pointing out issues with the Joy-Con's D-Pad and analog stick controls and suggested players pay an extra $70 to get a Pro Controller.[19] IGN concluded "Despite being the most complete version of Street Fighter II to date, the specific additions for the occasion just do not excite us."[20]

Despite the negative reviews, Ultra Street Fighter II: The Final Challengers is considered a "smash hit" in term of sales.[21] The game reached number 8 in the UK sales chart,[22] number 3 in Japan,[23] 2 in Australia and 3 in New Zealand.[24] In the USA eShop the game was number 2 behind Minecraft.[25] The Wall Street Journal's Takashi Mochizuki reported that the game sold over 450,000 copies, selling more than what Capcom expected. Because of this, Capcom has shown more interest in selling more games on the Switch.[26] As of 2018, the game has crossed 500,000 sales.[27] 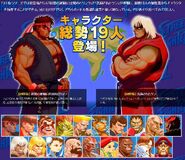 Poster of the character select screen. 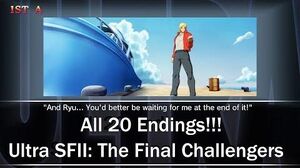