The Ultra Throw (ウルトラスルー, Urutora Suruu?) is one of Hugo's special attacks, introduced in the Street Fighter III series.

Executed by performing a half-circle backward motion and pressing kick, Hugo attempts to grab the opponent; if successful, he throws them toward the edge of the screen so hard that they bounce off the stage's "wall" and back towards him. The kick button pressed determines how far the opponent bounce off the wall.

The EX Special deals much more damage and causes the opponent to bounce at the same angle as the heavy kick version.

The throw itself inflicts moderate damage, and allows him to combo into a juggle (e.g. with the Giant Palm Bomber) or to simply grab them out of the air with the Shootdown Backbreaker or Megaton Press. This makes the throw uniquely important to Hugo's strategy, as it is integral to many of his combos. In principle, the attack is like an Irish whip into the ropes in pro wrestling: the intention is to set a helpless opponent up for another attack as they rebound back towards Hugo.

Hugo comboing from Ultra Throw into his second ultra.
Add a photo to this gallery 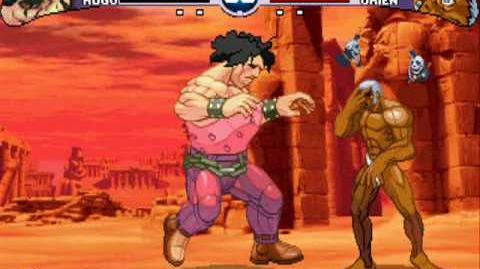 2nd Impact Hugo death combo
Hugo uses the Ultra Throw to set up a "touch of death" combo in Street Fighter III: 2nd Impact.
Add a photo to this gallery

Retrieved from "https://streetfighter.fandom.com/wiki/Ultra_Throw?oldid=218681"
Community content is available under CC-BY-SA unless otherwise noted.