A unique attack ("特殊技", Tokushu Waza, "Special Technique" or "Unique Art") as implied by its name, is an attack "unique" to the character using it. Unique attacks were introduced in the Street Fighter II series. In later games and other series, such as the King of Fighters, they are informally known as "command normals". In some circles of Street Fighter III, another name for them is lever-input arts (レバー入れ技, Rebaa Ire Waza).

A unique attack is usually performed with a simple motion (e.g. forward, down-forward, back, etc.) and a button, usually a specific one (e.g. Medium Punch, Light Kick). Most characters have at least one unique attack. Though some characters may have the same input for their unique attacks, the actual attacks themselves differ with the fighter. Despite this (and the name), it is possible to see two fighters with the same unique attack (e.g. Spin Back Knuckle). This may be due in part to them using similar enough fighting styles (e.g. Guile and Charlie, in relation to the previous example). Sometimes same names can exist for different characters that have no relation to each other like "Reverse Spin Kick" (Guile and Ibuki).

Special Attacks tend to out prioritize Unique Attacks in the input system. This is to ensure characters can use their specials easier and to avoid motions.

For a list of unique attacks, see Category:Unique Attacks.

As stated before, Unique Attacks tend to help characters in the input system differentiate between attacks. Some characters like Ibuki with multiple special and unique attacks benefits because her high attacks would tend to interlap more without much definition in terms of activation. Unique Attacks tend to have special properties, such as put opponents in Juggle states, be Special Cancel able, or give characters access to a mechanic they would not have access to without it (such as a slide). In some instances a unique attack can even form the core of a character's gameplan.

Some unique attacks even can be used in the air to give characters more pressure options. Zangief has Double Knee Drop, an attack that physically retracts his hurtbox. Not all unique attacks have special properties, such as Soul Piede. An attack that gives it's user another far range attack without properties of other attacks with the benefit of a little higher range. Unique Attacks can also be anti-air moves. These tend to (but not always) cause Juggles on the opponent, such as Ibuki's Agemen anti-air. 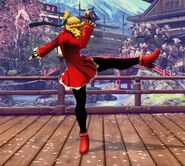 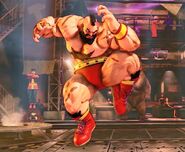 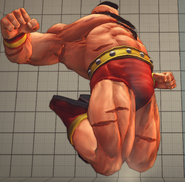