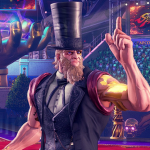 Name is Jojoker. I am back after almost a year, I did a little stuff here and there. But now I have some free time, so I hope to get back into helping the wiki.

Favorite character is tied between Sagat, G and Akuma. Rose is underrated, we need Haggar in a Street Fighter game, more Oro, and why not a new Street Fighter TV series?

Note on what to do. (Changes over time.) Edit

(This stuff is old, so it will be edited at some point.)

Retrieved from "https://streetfighter.fandom.com/wiki/User:Jojoker_%22Le_Wise%22?oldid=213946"
Community content is available under CC-BY-SA unless otherwise noted.