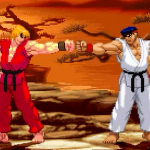 Hi, welcome to Street Fighter Wiki! Thanks for your edit to the Yang page.

Sorry I said wrong, I really bet with Ryu and Oro meet each other. Oro's ending in 2nd Inpact and 3rd Strike is non-canonical, He didn't defeated or fought against Ryu, because it was not proven that he actually had a fight with Ryu in any information in the internet or even the creators of the game (CAPCOM team) didn't said anything like that! The only canon things in his storyline are: Ibuki's graduation exam and Oro's ultimate fight with Akuma!!! Trust me pal, I dont want to frustrate you! —Preceding unsigned comment added by Tesshu (talk • contribs)

On Vacuums and True VoidsEdit

I don't want to start an edit war on anything, so I want to discuss it first. I understand how True Void 真空 is a valid way of translating Shinku from a philosophical perspective, and it also relates to Mu no chikara, but I think translating it as True Void is a mistake. Not only has it been translated as Vacuum for over twenty years now across the board, but as a technical description it's more accurate as well especially in the case of the Shinku Tatsumaki Senpukyaku, which has a much more literal vacuum effect. Rayfire (talk) 03:39, June 2, 2016 (UTC)

I knew you were going to respond with that. I however disagree that precedent should just be simply disregarded. Shinku Tatsumaki is not in reference to space, but the vacuum of a tornado, a natural phenomenon which the technique duplicates, and certainly not the vacuum of space. Also notable the primary user of the power of the void and nothingness Gouken, does NOT use Shinku techniques. It's been my interpretation that the Mu power is represented in the Shin techniques, not the Shinku. Rayfire (talk) 23:40, June 8, 2016 (UTC)

You're not wrong on the Philosophy at all. You even quoted the fact that the writers had Ryu himself said it's Vacuum rather than translating it as True Void, I had seen that, it's in the wiki already from Street Fighter III Second Impact. I didn't want to take it to Zero Point energy (that could easily be interpreted as ki in general) or any of that though. Vacuum of Space is fine, but it's still vacuum. I actually did look up the Japanese words for Vacuum Cleaner...it translates to Cleaning Machine. Even a tornado on the ground is a void from the sky in its own way. I do like the points on the links between Mu and Ten (what are your thoughts on the Ten translating as Invincible?), the void of space and the sky. Curious enough Shinku as in the Godai can also translate to simply Void, without true being separated. Between Void and Vacuum however I still prefer Vacuum. Rayfire (talk) 19:09, June 9, 2016 (UTC)

Frankly in English I would only refer to space as "the void" in the most poetic of instances. While True Void may describe the metaphysical basis of the technique, it has no verb to it, no action. Shakunetsu Hadoken literally scorches, Denjin Hadoken "electric blade" literally electrocutes, Messatsu Gou Hadou, well Akuma is literally trying to annihilate you. Rayfire (talk) 13:05, June 12, 2016 (UTC)

"Natural Predator" thanks for that, weirdly enough it enlightened something in One Piece for me. The bearers of the D. are known as 神の天敵 Kami no Tenteki, God's Natural Enemy. It adds a different perspective to realize that it's not just people who can stand up to the Tenryubito, but people who prey on them. Rayfire (talk) 13:15, June 12, 2016 (UTC)

You keep trying to explain to me the concepts behind the kanji as if I didn't understand you the first time. Look three paragraphs up, I already conceded that your interpretation on the philosophical meaning behind it was valid. That doesn't mean it's the absolute correct interpretation when translating. Just as you said that Karate could be translated one way, but that way isn't the proper way. Japanese is fond of double meanings, especially when naming techniques. Shinku as vacuum may be True Void on closer inspection (where the kanji are analyzed separately), but it is also on the surface a Vacuum (the natural translation when the kanji are read together). Vacuum also covers each interpretation, both as verb, adjective, and noun describing the deeper empty meaning. It conveys the meaning and naming better than True Void which solely describes the spiritual mechanism. Rayfire (talk) 22:25, June 16, 2016 (UTC)

That's why I specifically referred to the Shinku Tatsumaki as it has the most obvious physical description. Tatsumaki Senpu does not quantify it as a vacuum as the normal versions blow you away. Only those designated as Shinku have the vacuum effect. I'd say that the Shinku Hadouken has a vacuum effect as well, in so much as the normal version of Ryu's knocks you away, while the Shinku version actually holds you in place to absorb all five hits. You did not note how the True Void interpretation breaks the name scheme of all of Ryu's other attacks, all of which are less metaphysical and more straightforward. Even in the Japanese translation you provided, Shinku is translated as vacuum as is standard.

If I may propose a compromise as both translations are valid. In the Ashura Senkuu article the translation is presented like this. (阿修羅閃空 Ashura Senkuu?, "Asura/Fighting Demon Flashing Air").

So Shinku Hadoken (真空波動拳 Shinkuu Hadouken?, "Vacuum/True Void Surge Fist") could work in this situation. Vacuum being the standard translation one would get commonly, while the True Void is the advanced interpretation. Rayfire (talk) 04:51, June 17, 2016 (UTC)

I'm also going to add a link to a relevant wikipedia article (https://en.wikipedia.org/wiki/Five_elements_%28Japanese_philosophy%29#Void_.28ether.29) in the same way the Ashura links to that article as well. I appreciate you taking the time to discuss this with me, and I appreciate your insights. Thank you for your time. Rayfire (talk) 14:20, June 17, 2016 (UTC)

Retrieved from "https://streetfighter.fandom.com/wiki/User_talk:Bakframan?oldid=144119"
Community content is available under CC-BY-SA unless otherwise noted.