Being the world champion
Victor Ortega (ヴィクター・オルテガ, Vikutā Orutega?) is a character and the final boss from Ring of Destruction: Slam Masters II, the third and final game in the Slam Masters series of wrestling fighting games.

The Capcom Wrestling Association's original founder and owner who had also doubled as its first undefeated and undisputed champion, Victor Ortega's reign at the top began after he pulverized the top-ranking wrestler. Then suddenly, he mysteriously disappeared from the ring when there was no one left strong enough to give him a decent challenge and remained missing for over a year.

Shortly before the "International Blowout" began, Ortega resurfaced and agreed to The Scorpion's stipulations (which involved Ortega wagering his championship belt) in order to participate in the fight once again.

He seems to have been based on former wrestler Superstar Billy Graham. Ortega's win pose resembles one of Hulk Hogan's trademark poses (in real life, Hogan also partially based his gimmick on Graham's tactics, as the latter was both his mentor and trainer).

He is also mentioned in Darun Mister's backstory, as one of the wrestlers he aspires to challenge someday.[1] 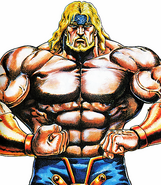