Vito Bracca is a character from the Final Fight series who only appears in Final Fight: Streetwise as the boss of the mob in Little Italy.

Vito sees himself as somewhat honorable, despite the fact that in his own words he's "far from an angel". He refuses to cheat someone out of their fair share, and wants nothing to do with the GLOW drug. If anything, he is more interested in putting an end to it and getting GLOW out of Little Italy before Blades kills him. According to Kyle, the only two things he fears are God and running out of linguini. He says that Kyle would have had his gratitude if Kyle introduced himself as the man who killed the Stiff. Likely, this is because he knows the Stiff is involved in dealing out GLOW and Vito is opposed to it.

Vito usually has two beautiful dames leaning on him while he watches pit fights from his comfy couch.

Cody would participate in pit-fights under his restaurant, until he found out that Cody was using the drug GLOW. He let Cody go, as some start to blame him for the appearance of GLOW in Metro City. He consults Father Bella for advice on what to do. Around this time, Kyle comes looking for his brother and starts to interrogate Vito. His lack of respect towards Vito caused Vito to have his hitman Blades throw him out on the street. Kyle returns sometime later, with advice from Mike Haggar, showing Vito respect. Kyle competed in pit-fights for Vito for free, in exchange for info on Cody. Kyle wins these fights and gets the info he seeks with Vito letting him keep the winnings as well.

The Gangsters are part of Vito Bracca's gang. They look like the Elite Guard, only they only wear dress shirts with no jacket and are taller. They are slightly faster and stronger than typical street thugs, and have better range because of their height.

The Killer Chefs are Vito Bracca's culinary staff at his Little Italy restaurant "Il Pesce Fuori di Acqua". They are big, strong, and are always equipped with knives to attack and throw.

After an attack on Japantown, Vito sees Father Bella asking for guidance about the GLOW dilemma. Unaware of Bella’s true intentions, Vito begins to pray at his suggestion. While doing so, Vito is killed after Blades impales him in the back of the skull with a pickaxe on Bella’s silent order. 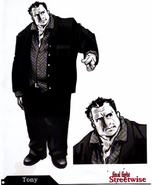 Add a photo to this gallery
Retrieved from "https://streetfighter.fandom.com/wiki/Vito_Bracca?oldid=184073"
Community content is available under CC-BY-SA unless otherwise noted.