The wake-up game is a term used to refer to tactics centered around attacking downed opponents in fighting games. The equivalent term in Japan is Okizeme (起き攻め, Okizeme? "Rousing Attack" or "Wakeup Offense").

While not exactly the same, vortex tactics revolve around a similar concept, and is often applied in tandem with anything that deals in offensive rhythm (e.g. pressure/rushdown and zoning).

In Japan, some fighting games allow players to attack rising or floored opponents. Okizeme revolves around taking advantage of their downed or recovering state to apply further pressure; downed players also have alternate methods of recovery, such as rolling away. The Japanese metagame of more than a few fighting games developed around (and are often dominated by) this concept, and Street Fighter was no exception, as noted by Capcom USA's Peter Rosas.[1]

In most of the Street Fighter series and many other '2D' fighting games, however the opponent cannot be attacked until they are considered standing up, giving them time to generate defense; as such, the wake-up game is more psychological, and relies on determining players' actions upon recovering from knockdown.

In Street Fighter, the defensive fighter, once knocked down by most attacks, can either Quick Stand or recover normally, and can utilize reversal attacks as well to create an opening; the offensive character must anticipate their method of recovery so that they strike at the first moment of vulnerability and maintain the advantage, often by forcing them to block immediately.

Depending on the character match-up and the players' skill levels, it is possible to be caught in a completely unblockable setup, often as a result of hard knockdown.

Tools for Offense and Defense[]

In addition to "meaty" attacks (moves with a lot of 'active' frames) and reversals (particularly with invincible-startup moves such as the Shoryuken), some games have alternate recovery options, such as recovering in midair or rolling off the floor (both used in the Street Fighter Alpha series), that can be used to escape knockdown. Rolling is often used to initiate "tech-chasing", where the offensive player must reposition themselves in order to maintain the advantage by reading their opponent's recovery direction.

Ultra Street Fighter IV introduced a fix for unblockable setups in the form of Delayed Wake-Up, a knockdown option that can give defenders an edge in recovering and avoiding attack by staying on the ground for longer.

Zoning can also go hand in hand with a wake-up game; disjointed moves and projectiles can apply "indirect" pressure that forces the foe on the defensive while giving the offensive player the space to press their attack in whatever way they choose. Cross-ups and overheads can also be used to complicate defensive responses.

Grabs and throws are usable for both ends of the wake-up game: on offense, a player can force a foe to block and set up "tick throws", where they can throw the foe at potentially any point in the 'blockstring'. An example of tick throws are in some AI routines in Guile, Charlie and most notably, Akuma, who tests with a short crouching kick before attempting to throw. Grabs and throws are often unblockable can also cause a hard knockdown, preventing Quick Stands. On defense, it can be used as a preemptive tool, especially if a foe gets too close; short-frame grabs may be more useful to this end. A perceptive defender may also be able to predict and tech a throw, or even outright attack the player which would defeat the purpose of the throw; Such actions are a necessary counter against tick throw setups.

As aforementioned with the concept of the vortex tactic, characters who often rely on okizeme as part of their main gameplan usually have a low damage output in someway, causing long scaled-down combos to deteriorate their damage output even more. Thus, they prefer to reset damage scaling with short bursts of consistent damage, especially thanks to their possibly offensive-heavy kit.

Here, an Ibuki player can react to a delayed wakeup, a Kunai catches a delaying opponent at the same timing her LK would catch a non delaying opponent, This gives Ibuki an incredible wakeup game.

In a similar situation to above, Ibuki can back jump instead to set up an ambiguous crossup on Ling Xiaoyu, While Xiaoyu has a chance to block in this scenario Ibuki can inflict even higher damage than from a simple throw if Xiaoyu guesses wrong. 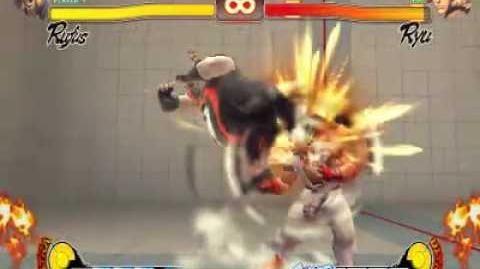