A win quote is a feature in fighting games that lets the victorious player give a message to their defeated opponent after the fight. The feature is not only used to bolster the entertainment value the game has, but also to provide insight on a character's psychology and personality, their relations with specific characters and insights and hints to mysteries that are found within the game's story and world.

Win quotes are in all versions of the Street Fighter games.

In the original Street Fighter, Ryu and Ken would say "I wish you good luck" to each other after a battle. Their opponents would all say the same losing quote after being defeated by either of them: "What strength!! But don't forget there are many guys like you all over the world". The only exception to this would be the final boss Sagat, whose own defeated quote is this: "You've outlasted the best. You are now the strongest Street Fighter in the world!". Should any of the opponents win against either Ryu or Ken, all of them would say the same win quote: "You've got a lot to learn before you beat me. Try again, kiddo!" and give a taunting maniacal laugh.

Some games such as Street Fighter II: The World Warrior shows the victorious player talk to their defeated opponent who is left bloody and bruised, but in Street Fighter Alpha 2, the win screen does not show the losing fighter's hurt face. The message is stored in a pink box when the player is victorious.

Each character has a certain quote (only one) when they win two rounds of the fight. Win Quotes are supposed to lead to a Game Over if the player is defeated.

Starting in the Street Fighter II series, actual win quotes debuted. Both in the II and Alpha series, characters have universal win quotes like Ken's "Attack me if you dare, I will crush you!". This did lead to some questionable win quotes such as Guile's "Are you man enough to fight with me?" when he wins against Chun-Li. Another questionable win quote is one of Balrog's win quotes in Super Street Fighter II Turbo HD Remix, "My punches are stronger than your kicks!", when he defeats another Balrog, because Balrog does not do kicks.

Starting in Street Fighter III: New Generation, some characters would start adopting character specific win quotes that would not only fit their character, but their opinion on the defeated opponent. Examples include Alex telling Necro that both him and his moves are weird. These character specific quotes would revert back to their universal win quote system in Street Fighter III: 3rd Strike, albeit with more variety than the II and Alpha series. Also in both New Generation and 2nd Impact, the winner's win quote could also be based on their own opinion of their Super Art if the winner used had said attack to win the battle.

Starting from Street Fighter IV onward, each character would get both universal win quotes and character specific ones. Universal win quotes usually consist of the character mentioning their own power (M. Bison talking about Psycho Power) or their opinion of their defeated opponent. Characters like Necalli and Oni even get a unique animation when they defeat their opponent before their quote appears on screen.

In Street Fighter × Tekken, official teams talk to each other rather than use win quotes. The Win Quote screen is used to advance the story and interaction between both characters.

An example of the only losing quote from defeated opponents (such as Joe being shown here) in the original Street Fighter with the exception of Sagat.

A win quote from Joe in the original Street Fighter.

An exclusive losing quote from either Ryu or Ken after a two player match.

The aforementioned glitch from the original Street Fighter. 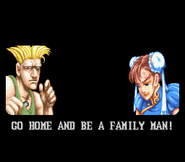 Another infamous win quote from Guile.

In M. Bison's win quote, there is a typo where he says "Get Lose" instead of "Get Lost". This typo is only present in Street Fighter II: The World Warrior.

In Street Fighter × Tekken, characters can change their mood depending on the defeated opponent. Here, Ibuki is irritated at Lili (even referencing Naruto).

SF Win Quotes
Win Quotes as they are spoken in the original Street Fighter.

SFXT Win Quote Moods
This video shows how Win Quotes are in Street Fighter × Tekken and the mood changing that is exclusive to this game in the win screen.

SFXT Winquote songs
In Street Fighter × Tekken, the win screen changes songs depending on which franchise the winners are from.