Executed the same way as the Shun Goku Satsu but moving backward instead of forward, it is essentially the same as the original on startup; when Akuma comes into contact with his opponent, however, the camera briefly changes into first-person view (from the helpless opponent's POV, essentially facing towards Akuma), and four kanji appear in the corners of the screen. The screen goes black as 27 "hit sparks" flash, with the opponent screaming in pain as if they were just knocked out. The camera then closes up on Akuma after the last hit lands, with the ten kanji (天, "heaven") appearing on his back and in the background as well, his downed opponent lying at his feet.

The kanji that appear during the closeup on Akuma (一瞬千撃', Isshun Sengeki, "One instant, one thousand strikes") were mistranslated for the English release of the games, resulting in Akuma's given quote above.

Curiously, "Isshun Sengeki" and "Die One Thousand Deaths" renders an identical mouth movement for Akuma, in contrast to most translated or English dub voices would desync with character mouth movements that are normally designed for Japanese speech in the game.

The attack is used as Akuma's Rage Art in Tekken 7: Fated Retribution. It is performed more as it is the original Raging Demon, using the input LP, LP, forward, LK, RP.

Wrath of the Raging Demon appears as Akuma's Ultra Combo in this game. Unlike the other bosses, however, Akuma starts the battle with a full Revenge Gauge meaning he can and will use the move immediately as the fight begins. Akuma is completely invincible during the dash which crosses the entire screen, referencing Shin Akuma's version of the move in Street Fighter IV. If Mega Man is hit by this move, he will be killed instantly.

In the mobile game, the attack is used by Akuma in both 3-Star and 4-Star appearances when he is in a Critical and Rage state. His Rage Art can be avoidable when the player move backwards by tapping at the left several times depending on the player's success to avoid contact with the move. If it connects, it deals heavy damage.

Wrath of the Raging Demon has invincibility on startup like most Ultra Combos, as well as a high damage output. If performed with a full Revenge Gauge, it can inflict up to 510 damage to the opponent, more than half of an average life bar. As it isn't a zero frame grab, it works best as a counter, a punish or an anti-air in contrast to the regular Shun Goku Satsu.

Shin Akuma's Wrath of the Raging Demon uses a "true" Ashura Senku during the slide; thus, he has the ability to pass through attacks that would normally cancel the Raging Demon. The speed of the slide is much faster than that of his playable counterpart, and the slide itself covers the entire screen.

While most Ultra Combos cannot be canceled into, Akuma can cancel any of his normals (except crouching heavy kick in Ultra Street Fighter IV) into the Wrath of the Raging Demon; as the move is a grab, this cancel is used to either easily buffer the move or catch an opponent in the middle of an armored move, like a Focus Attack.

Akuma about to perform the Wrath of the Raging Demon on Ryu.

A close-up of the Ultra Combo's aftermath.

The Ultra being used to grab Dudley out of his EX Short Swing Blow.
Add a photo to this gallery 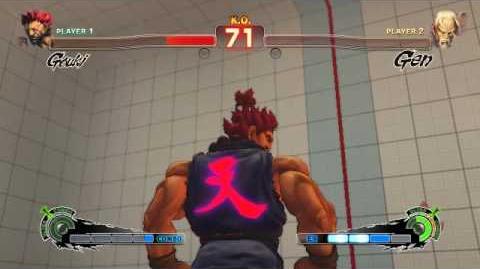 Super Street Fighter 4 - Akuma Ultra 1
Wrath of the Raging Demon (Japanese voices).
Add a photo to this gallery
Retrieved from "https://streetfighter.fandom.com/wiki/Wrath_of_the_Raging_Demon?oldid=213266"
Community content is available under CC-BY-SA unless otherwise noted.