Ibuki assumes a pose and proceeds to throw Kunai at the feet of her opponent. If she connects she proceeds to use her extreme speed to continuously slash her opponent with strikes backed by a bluish Ki. Depending on the game the final strike will either have Ibuki's opponent flying vertically or send the opponent horizontally away. If the attack is blocked Ibuki jumps in the air, which gives her real Jump Frames that can avoid some attacks but still is very likely to be Punished on block.

The attack is unusual in that the followup dashes will even initiate if the kunai hit something other than the opponent. For example, Sean's basketball or Dudley's rose can both be hit to start the attack.

Executed by performing two quarter-circle forward motions and pressing punch, Ibuki throws three kunai into the ground directly in front of her. If these kunai hit the opponent, she will then perform several dashing attacks back and forth past the opponent. It reliably works as a Link from Hammer Kick. Yami Shigure generally works better than her other two options for extending and ending combos as it can not be followed up on compared to Hashinsho before it.

The move is used during Ibuki's Cross Art. It's synnergizes well with most of Ibuki's moveset including her groundbounces. Care has to be taken when canceling into this from Juggling combos the push-up from the attack this was canceled in between it's 7 frame startup can move the opponent vertically higher than this attack's range. While it has a decent amount of horizontal range, it's 7 frame startup limits what it can punish. Like all Cross Arts it was buffed from 100 to 150 total between all hits in the last patch before Ibuki sends her opponent off to her own partner.

The move returns in Ultra Street Fighter IV, where it acts as the EX Special version of Ibuki's Kagenui in OMEGA Mode, and uses two bars of the Super Combo Gauge. As OMEGA reuses animations and effects the dashes are recycled Kasumi-Gake and it is missing the blue ki "slash" effect as Ibuki doesn't have it in said game.

Shigure (時雨, lit. Time Rain) is a popular Japanese term for either a drizzle or light rain during the time of late autumn/early winter.

Xiaoyu feels the neck twist effect of the after hit.

Ibuki overwhelming Decapre with her speed and after images 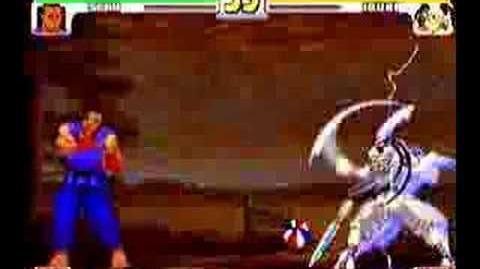 SFIII 3rd Strike - Yami-Shigure and Ibuki
Demonstration of Sean and Dudley's taunts triggering the Yami Shigure in SFIII.
Add a photo to this gallery
Retrieved from "https://streetfighter.fandom.com/wiki/Yami_Shigure?oldid=238461"
Community content is available under CC-BY-SA unless otherwise noted.