Executed by pressing downward and heavy punch while in midair, the move consists of Dhalsim slowly twirling downward, spinning like a drill, and hitting the opponent headfirst.

This attack alongside Yoga Spear both became much more useful in the Champion Edition update. In World Warrior, both attacks could only be done at the apex of his jump, lowering it's effectiveness. From Champion Edition onward, Dhalsim could perform both attacks at any point of his jump, giving it properties similar to Rufus's Falcon Kick. Yoga Spear is probably more useful overall due it it's angle. 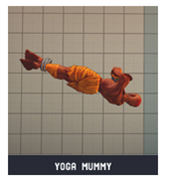