"This is my ultimate move, the Yoroi-Doushi!"
—Ibuki in Street Fighter III: 2nd Impact

The Yoroitoshi (鎧通し, Yoroitooshi?, "Armor Piercer"), also written as Yoroi-Doushi, is one of Ibuki's special attacks, it first appeared as her second Super Art in the Street Fighter III series and later returned as her Ultra Combo in Super Street Fighter IV. This move is Ibuki's only ground projectile (if the grab was unsuccessful).

Executed by performing two quarter-circle forward? motions and pressing punch, Ibuki manipulates a massive amount of ki, and performs an extra-powerful, unblockable Raida attack on the opponent's torso. If it fails to grab the opponent (e.g. too far away), she extends her arm and fires an orange colored blast that moves about four inches and gets smaller.

Executed by performing two backward-half circle motions and pressing all 3 punch buttons, Ibuki performs a Raida; if it connects, she performs a more powerful one using her elbow, instead of her fist, shouting out the attack's name. It is important to note that the grab is not 0 frame activation like Zangief or T Hawk's equivalent but instead it is 1 frame that makes it more of a punish ultra for attacks that are otherwise safe at -2.

Yoroitoshi acts rather differently in this game. It is not classified as a grab, and it is a strike. It still retains it's one frame startup, instead of attempting a grab Ibuki travels a horizontal distance before proceeding to the fireball stage of the attack if she does not reach anything. It should be noted that the fireball is not safe even on hit.

Yoroitoshi roughly translates to "Armor Piercer" in English, as shown above, which may refer to the move's unblockable nature. It is also the name of a Japanese dagger-like sword used for just that purpose.

Ibuki launching a beam of her power in Yang's belly about to explode.

Ibuki using the attack against Ling Xiaoyu after an assist from Rolento. 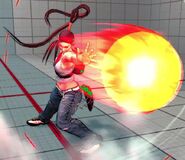 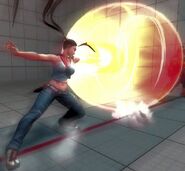 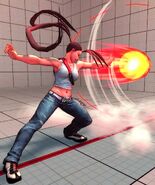 The after hit of Yoroitoshi being used in a combo.

Yoroitoshi in a fixed angle

Second stage of the attack.
Add a photo to this gallery 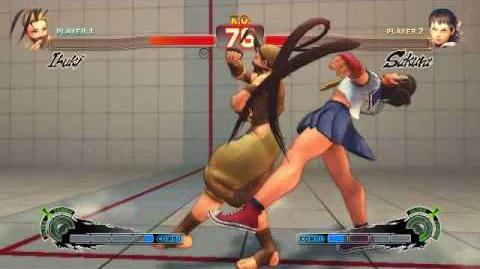 Retrieved from "https://streetfighter.fandom.com/wiki/Yoroitoshi?oldid=213926"
Community content is available under CC-BY-SA unless otherwise noted.