Executed by pressing down and Medium Kick while airborne, Chun-Li will bring one of her feet downwards, hitting her opponent below.

When Chun-Li hits her opponent with this move, she will be in range for another Yosokyaku. She can use this move up to three times in a row. After the third hit, Chun-Li can follow up with EX Hyakuretsukyaku or other airborne attacks. This attack is well known to be a "panic" move when ground foes prepare to counter-attack Chun-Li, since the move has good range and duration. This move also creates mixup situations for Chun-Li. After hitting her opponent with Yosokyaku, she can land on her opponent's front or backside. This will confuse them in blocking the wrong direction, temporarily opening them up. Also, this attack is a good way to close out the round as it can be used as an instant overhead.

In the Street Fighter II games this attack could be used an infinitely amount of times, provided it hit the opponent previously. Against big bodied characters like Zangief Chun Li can get a high number of hits mashing this attack if Zangief is hit in his lower body area. This attack can also catch extended hurtboxes, This is not recommended as Chun-Li would continue moving forwards and make herself vulnerable to attacks such as Shoryuken, Tiger Uppercuts, and Air throws of other characters such as Vega and Cammy 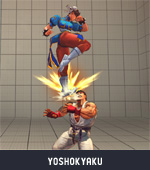 Retrieved from "https://streetfighter.fandom.com/wiki/Yosokyaku?oldid=207631"
Community content is available under CC-BY-SA unless otherwise noted.