The Zetsuei (絶影, Zetsuei? "Severing Shadow") is Gen's first Mantis-style Ultra Combo, introduced in Street Fighter IV. It is a more powerful version of the Zan'ei.

Executed by performing two quarter-circle forward motions and pressing all three punch buttons, Gen prepares as he would for the Zan'ei, and dashes forward, with his hand configured the same as the Zan'ei.

If the attack is not blocked, then Gen will continue to dash in a blur, back and forth past his opponent; when Gen stops, the opponent will suddenly suffer a total of 13 hits in damage simultaneously.

Higher quality ending pose.
Add a photo to this gallery 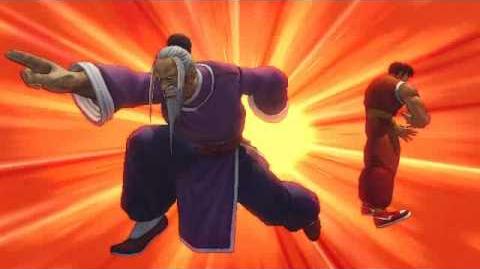