The Zugaihasatsu (頭蓋破殺, Zugaihasatsu? "Cranium Crush Killer") is one of Akuma's, Evil Ryu's, and Kage's unique attacks, appearing in all of the Street Fighter series.

Executed by pressing forward and Medium Punch (Heavy Punch in other versions), the user delivers an open palm chop to the opponent's head, hitting them twice overhead.

The attack is normally fast, but it was often slow in past appearances and then became very slow in the Street Fighter IV series, being vulnerable to any quick attack. However, it has great combo potential, as it can be canceled to any special after the second hit, but not any Super or Ultra Combo.

However, in some games such as Marvel vs. Capcom 3, its use can be for juggle combos due to its ground bounce property. 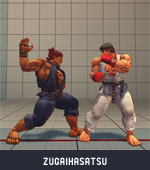 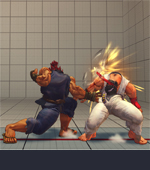 Kage's Zugaihasatsu
Add a photo to this gallery

Retrieved from "https://streetfighter.fandom.com/wiki/Zugaihasatsu?oldid=218904"
Community content is available under CC-BY-SA unless otherwise noted.